Coffee House Press is a poetry treasure: one of today's most fabulous presses, it consistently "brews" wonderful work by contemporary poets.  This is one of their catalogs, which I saved because I suspected it could provide raw material for a mini-book or two: 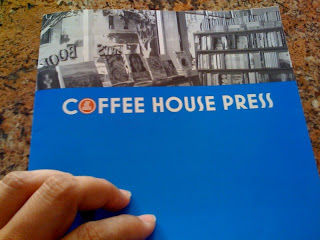 Well, I finally had a chance to return to it.  Since I just received a review copy of Eleni Sikelianos' The Loving Detail of the Living & the Dead, my attention lingered on the catalogue's one-page write-up of Eleni's most recent offering  The write-up included a poem, "Comes to Me," which I thought is so fabulous I wanted to create a mini-book for it.  So, I did!  So, first, compare the one-page catalogue write-up below, with the result after I cut out areas that I used to create a mini-book (the second image is a xerox of the original page as I'm thinking of using the other side of the original page for a different mini-book "by" Bob Holman): 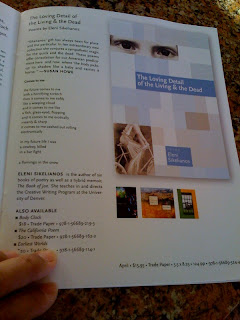 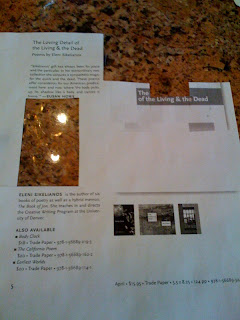 That's right.  From the little I cut out of the page, I created a mini-book entitled Loving Detail.  I spliced the two words out of the title and would come to paste it onto the front cover of the mini-book.  I thought the reference to "Detail" would be appropriate since the mini-book would contain only one of the many poems in The Loving Detail of the Living & the Dead.  So here's the front cover to this 2" x 2" mini-book: 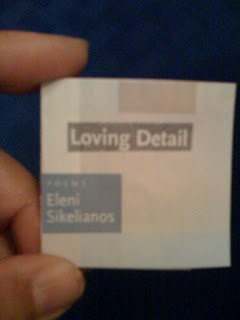 You would open it to see the following, which features not so much a set of eyes but a stare (the gaze?). The photograph was taken by Laird Hunt, novelist and Eleni's partner: 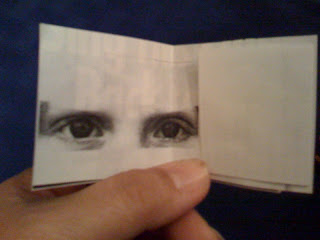 Then you can pull open the piece of folded paper to reveal the poem which I found so compelling: 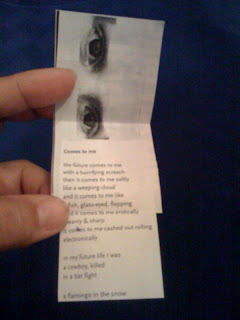 Here's the text of the poem:

in my future life I was
a cowboy, killed
in a bar fight

a flamingo in the snow


Eleni has a sure hand with such leaping juxtapositions -- here, "electronically" to "cowboy" to "flamingo" -- that is one of the strengths of The Loving Detail of the Living & the Dead.  Narratively, the references may seem random and yet within her poems the details offer a surety in their presence.  I think that surety is because the poems present messages that need to be shared--and that the reader is drawn to try to understand--yet the narratives are not spoonfed; hence, the reader grabs onto any detail in an attempt to understand and/or inhabit the poem.  Here are two poems that exemplify what I'm trying to articulate about the charisma of Eleni's  newest book:

A man called Dad walks by
then another one does. Dad, you say
and he turns, forever turning, forever
being called. Dad, he turns, and looks
at you, bewildered, his face a moving
wreck of skinn, a gravity-bound question
mark, a fruit ripped in two, an animal
that can't escape the field.

What's mamma do
you're back, you came back from the snow

Did you been in the snow
when I was dreaming about you?
You carried the horses
on your back, you held them
tight all the way from Denver, you carried
the snow on your back


I suppose (some of) Eleni's poems can be considered "difficult" [to understand].  If they are, they nonetheless are not off-putting like other difficult poems.  She writes poems that, if not immediately graspable, are not ones with which to wrestle so much as to simply spend time.  Anyway, I highly recommend Eleni Sikelianos' The Loving Detail of the Living & the Dead.  Turning now to a shard from it -- the mini-book Loving Detail -- after reading its lone poem, you might close the book and this is the back cover image -- it presents a photograph by Etienne-Jules Marey whose mystery, and detail, I find so aptly evocative: 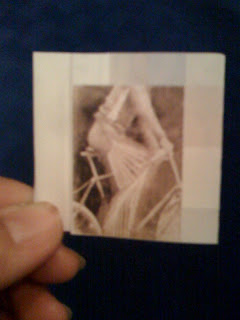 If you don't know Eleni Sikelianos' writings, do look up her books (The Book of Jon is a particular favorite).  You can click on the link to Eleni's name for a start, but I'd also like to share the link to a review Susan Schultz (another stellar poet) once wrote on Eleni's works--this from Boston Review--as it reveals something about "collage poetics" which may be applicable to this poem or the larger book given the extensive "Notes" citing sources (but even if not applicable, it is, in any event, interesting...).

Now, where shall we "shelve" Eleni's ethereal mini-book?  Well, why not on one of my inventions (hah), a Richard Odom Stool: 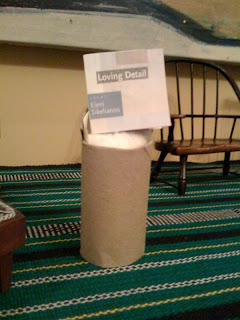