So I have two strips of paper left-over from the SFSU Poetry Center flyer that I cut up to make SELECTED BOOK COVERS by Jukka-Pekka Kervinen.  I saved them because they are large enough to provide, ta-dah, book covers to new mini-books. 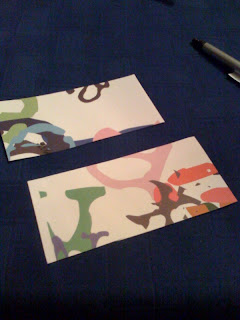 Well, I decided to use one for such a mini-book that I entitled NOTA BENE.  "Nota bene", of course, tells one to "note well" ... and what I wanted to note (to possible readers) was something that's long irritated me on a low-grade level: my "Eileen Tabios" Facebook page. If you click on the link, you'll see that I'm not active on it, though I will respond if somebody stumbles across it and makes a comment. I didn't set up that page -- I think the FB "Bots" did it by doing minor culling through the internet to create one for Moi.  Needless to say, the more "members" viz FB pages exist, the higher presumably the valuation for FB's worth -- how come the Securities Exchange Commission didn't look into this FB practice before it allowed its (overvalued-haha) initial public offering?!  Someone should do a class action suit on behalf of enforced members like Moi to get a share of the IPO funds -- what $5 billion? -- raised!

Anyway, getting back to mini-books so as to erase moi irritation (there: evaporated!) I did also notice that the flyer's strip of paper is too flimsy to act as a book cover, so I wanted to strengthen it by pasting another strip of paper on its "verso" (interior) side. For that purpose, I decided to recycle a draft homework by my son when he was studying Africa partly by learning its geography.  I liked the idea of using a map, as I wished the poem to give a truer reflection of "Eileen Tabios" than is provided by Facebook. 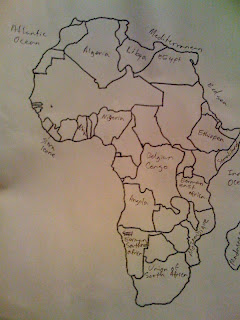 After I pasted on the strip of paper, I still felt the book needed some firmer backing.  So I decided to cut a strip from a holiday card which had a pale blue color that I felt went well with the colors on the cover.  I finally did take down the display of holiday cards, but had saved several that I thought might help create future mini books. 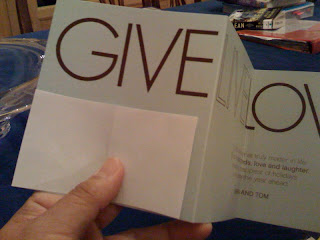 And so we come to my new book, NOTA BENE. Here is the front cover, with design but of course by Jukka-Pekka Kervinen: 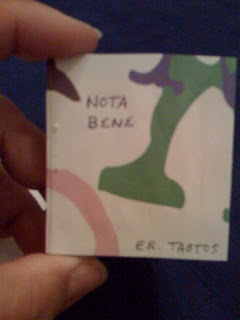 You open the book to the title page and the interior cover presenting a map. 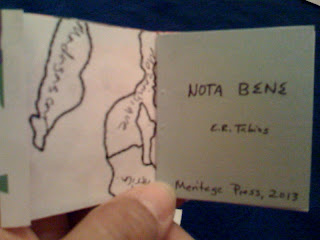 You turn the page to see the title of the poem, "On Booking My Face." 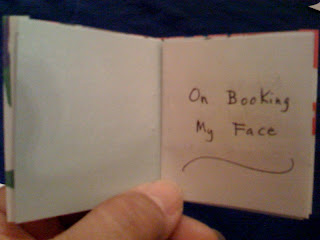 You turn the page to the poem's text, two hay(na)ku tercets: 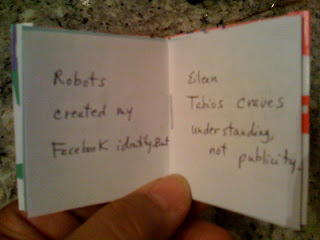 If you can't read my handwriting and/or the image, here's the poem's text:


You turn the page to a "Note" that says, "The last line paraphrases [art critic] Harold Rosenberg's statement on what is needed by American vanguard art, noted in his essay "The American Action Painters." 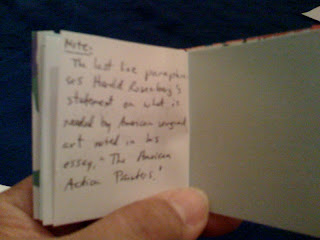 The inclusion of the poem's last line, and subsequent "Note," arose from the coincidence that, while creating this mini-book, a print-out of the art critic's essay happened to be nearby on the table where I was working (and which I recommend reading): 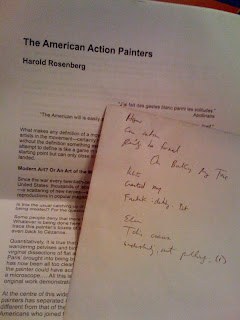 If one thinks about it, I might not have written the poem the way I did if the print-out didn't happen to be lurking nearby.  Improv -- a way to create poems outside the limits of one's imagination!  Anyway, returning to the mini-book, you then turn the page to the last page and inside back cover: 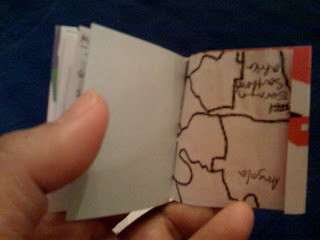 You might observe that the map seems upside down.  That was deliberate because I wanted to give a sense of a "map" without it necessarily being an African map.  It's the same effect that Jukka's book covers can effect: that the images are of letters and/or words, but they're abstract (thus, not identifiable as specific letters/words).

Entonces!  I hope all of that warranted the use of one of the two remaining book covers by Jukka-Pekka Kervinen!  Now, where shall we "shelve" this book by the prolific Moi?  Ah, how's about on the Mary Scheller couch to keep company with Tom Beckett's Steps: A Notebook! Understanding, not publicity -- that's also often misunderstood in the poetry world ... but that's a different story for another day ...
Posted by EILEEN at 9:34 AM