So, as I was saying in the prior post, I had a good mail day when this arrived with both a mini chair and a mini book! 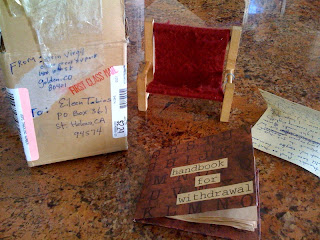 It also came with a lovely note from Erin Virgil, a Colorado-based poet who sent me the package.  And as I cooed over its contents, my attention was suddenly drawn to the box in which the goodies arrived.  I kept looking at it, thinking that the corner could become a book cover: 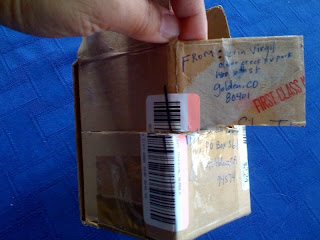 So I cut off the corner, folded it, and liked its image as a book cover.  Love the pun "First Class"!  Indeed, as I positioned it over the chair that it brought, I thought it would be a book to "shelve" on that chair! 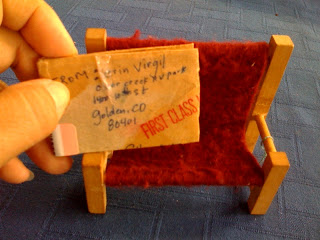 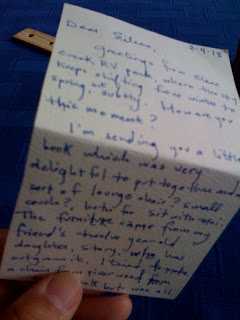 I read something in it that I thought would be perfect, but I didn't want to cut up her note.  Then I noticed, nearby, some paper -- some fairly nice stock, I suddenly realized -- that had been sent earlier by another poet, Marton Koppany of Hungary (whose own mini-book will be the subject of a future post).  I decided to slice out a section for the book's interior (yay, Erin: your book has Hungarian paper!): 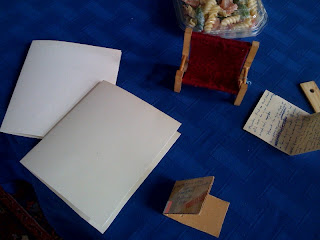 So, I prepared the book, and here it is, beginning with its front cover (sorry for my finger but I thought I should try to hide Erin's address): 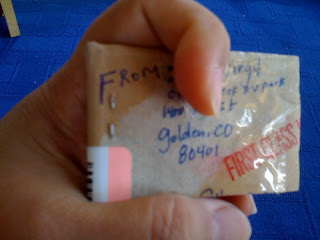 You would open the book first to the title page: MEMORY by Erin Virgil and presumably published by Meritage Press (which is my press, hence I always take its name in vain for purpose of SitWithMoi books). 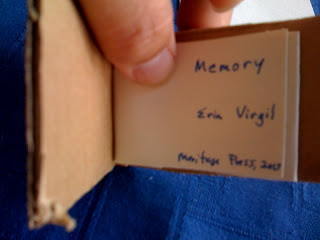 You would turn the page and see the beginning and ending pages -- exactly as how they appear on Erin's actual note to me: 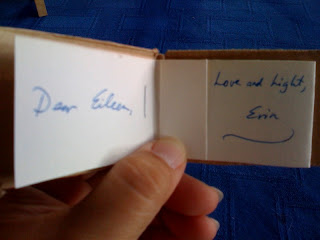 You would then turn the page to get to the heart of the book: a memory-- 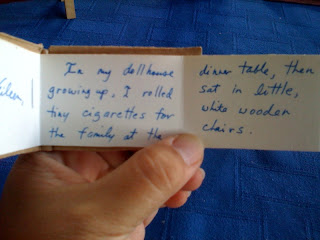 In case you can't read my handwriting, the text is:

In my dollhouse growing up, I rolled tiny cigarettes for the family at the dinner table, then sat in little, white wooden chairs.

Short but enchantingly sweet, don't you think?   And to be concluded by Erin's wish that, as the book's last page, is now directed at any reader of hte book and not just to "Eileen":


Well, I think MEMORY by Erin Virgil is replete with Love and Light.

Also, when you close the book, you will see this image on its back cover: 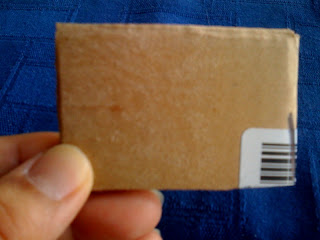 I think that's hilarious.  That stamp, when seen in this context, suddenly looks like a bar code -- just as you would see on many books' back covers!  Love that effect, and specifically how it's perfect and yet wasn't planned!

But the design wasn't yet finished!  Because the cover was thick cardboard, the book wouldn't lie flat.  So I thought to create something that would close the book.  Well, I happened to be having lunch while I created the book, and noticed the brown paper bag in which lunch had arrived.  I thought to slice a strip from it: 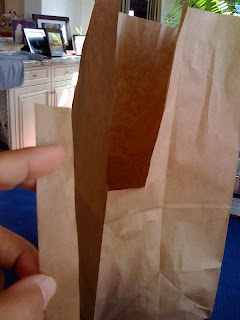 I then created a roll that could slide over the book.  And it would look like this -- love the pun "Class"!: 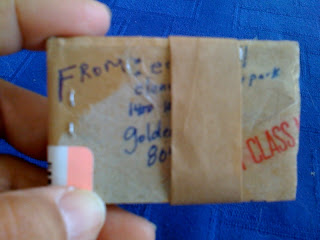 And, as planned, the book would come to be "shelved" in its resting place, the accompanying chair that was once owned by a girl named "Story." 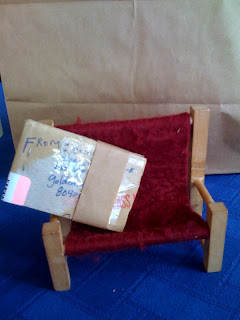 I hope you enjoyed this story.