Joanne Kyger is a wonderful poet whose poems should be read, explored, felt ... but rather than have Moi explicate about her, let me cite something said about her from the book description to her book AGAIN: POEMS 1989-2000:

Shaped by an effortless breath line, Joanne Kyger’s poetry is gifted with exquisite sensory awareness, a landscape painter’s eye, and friendly compassion. It conducts an intimate debate on the process of language, always with a wonderful sense of humor, sometimes self-deprecating, sometimes excoriating the bad behavior of miscreants and proponents of a false culture. Again: Poems 1989-2000, a long-awaited collection, spans a decade of daily life, deaths, seasons, bird migrations, journeys—and the who, what, where, even the why of conscious human puttering. Each poem finds its own form as well as place in the accumulative totality of the “book.” Kyger’s work continues to be an ongoing narrative, “the story time makes in a life,” wise talk, notations and gossip. To read these poems is to sink deeply and fly gracefully at the same time—and suddenly discover your own life talking back. One of the acknowledged female “Beat” poets (although she herself dislikes that limiting designation), she has been an inspiration to countless other writers, women as well as men, the young as well as her peers.

For more information let Moi also point you to these links

and I suggest following up with her books -- she's a prolific author, which is all the better for poetry lovers.

The mini-book I wrote on behalf of -- and for -- Ms. Kyger had two seeds.  The first was a desire to recyle one of the Holiday cards I received -- as you will see from the image below, it has a nice nature/tree theme.  But what also moved me to turn it into some mini-book's cover is the thickness of its card stock, perfect for this project: 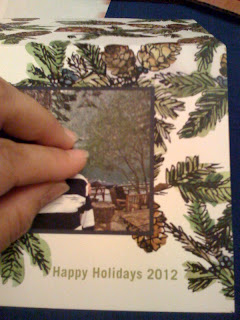 The second seed was stumbling across a 2006 bookmark put out by Poetry Flash as a "gift for the New Year."  On the bookmark is a poem I've always enjoyed by Ms. Kyger, "AGAIN," the title poem to her book AGAIN. 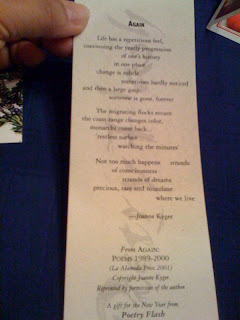 I had some yellow paper nearby (from having just finished making an enclopedia -- a post for another time, but will link to it when done) that I thought would provide a nice contrast to the book cover's palette of green and brown.  And so I cut-n-pasted a yellow strip to feature the title and author and, ta dah, a new mini-book! I entitled it, of course, AGAIN2 ... and I liked the synchronicity of re-featuring the poem in a new way ... again!  The "2" in the title is actually supposed to be the smaller, lifted "2" that denotes mathematically the squaring option (I just don't know how to present a square function on Blogger). 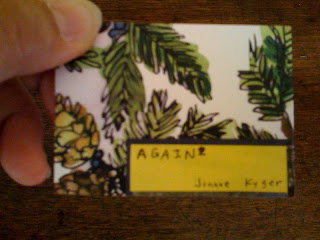 You would open the book (yes, please do admire the cover's French Flaps) and see the top of the ex-bookmark.  I had decided to cut the bookmark into sections that would become pages in the mini-book (as well as pasted over a thin strip of yellow paper to cover my lame-o "binding" of a single staple). 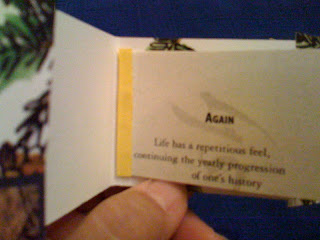 Unfortunately, because I don't have Joanne Kyger's permission to reprint the poem here, I can't flip through the entire mini-book and/or share the poem in full. I can share that it begins, "Life has a repetitious feel..." (If I can eke out the time and get my act together to request permission and receive it, I will edit this post to do so.) But I can show you its last "page" which credits AGAIN: POEMS 1992-2000 (La Alameda Press, 2001). 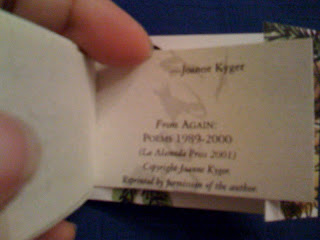 Last but not least, here was the bottom strip of the bookmark: 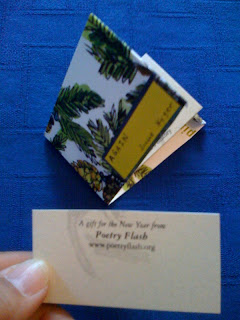 Look at what I did with it!  I narrowed the strip further and, of course, created a mini-bookmark!  The bookmark becomes a bookmark, too, again!  (I have to say, I was quite proud of determining this move as it took me a couple of days to figure out what to do with what was initially a left-over strip...) 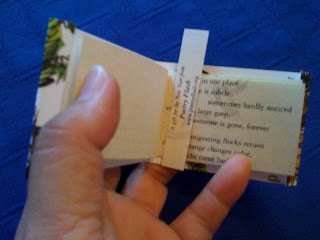 And now, where shall we "shelve" this mini-book? But of course!  Let's have it atop the non-seasonal Santa book on Ronda Vallejo's (hi Alex!) ottoman! 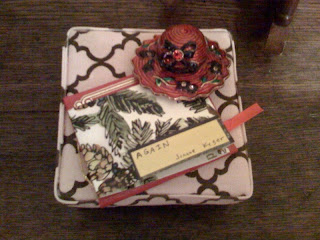