Again, this is a mini-book I created without anticipating its creation.  Recently, I received from poet-publisher Juliet Cook some chapbooks that she hoped my poetry review journal, Galatea Resurrects (GR), would review.  The chaps were Renegade // Heart by Lisa M. Cole, published by Juliet's press, Blood Pudding Press.  The other chapbook was Juliet's own POISONOUS BEAUTYSKULL LOLLIPOP published by Grey Book Press and which I show here with the mailing envelope: 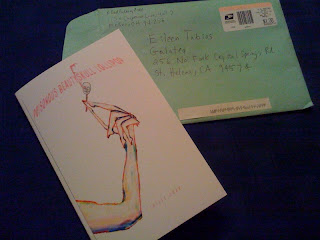 Both chapbooks were enclosed within a piece of paper that happened to advertise an art exhibit; tied around the package was a white fuzzy ribbon: 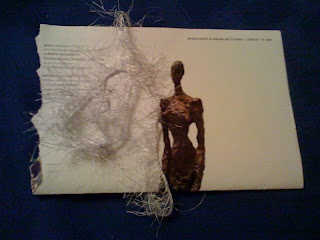 I had read both publications and enjoyed both.  But just as I was about to file both in GR's review copy shelf and recycle its mailing envelope, my ever Crack-the-Whip-Muse stayed my impulses.  I looked at the above images again, and subsequently and predictably would realize, Okay, Muse: I guess I gotta do a mini-book!

First, I cut up the strip with the stamp, and then folded the stamp corner over to create what would be the front cover to a 2" x 2" book 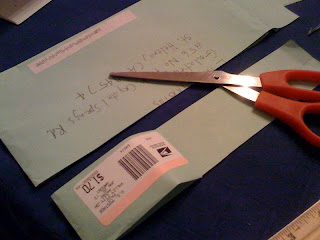 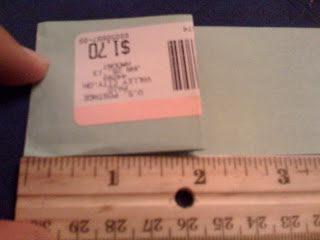 I already had the idea that I'd turn the strip of paper into an accordion-type book where I'd write in the opening poem to Juliet's chap, which may be the "title poem" in the sense that it contained the phrase "poisonous beautyskull lollipop." Here is that poem--which I think is just fabulously powerful!

scissoring images of women, categorizing them into portals

making flashcards out of some of them, gluing them onto squares

a hole series comprised of busty ladies, in the back

rap their knuckles, retail their brains into bikini zone palettes

slash me into desirable womanly creature over under

conjure up my broken doll legs, sink me inside my odd doll factory

mounted on a strange vase, I am a poisonous beautyskull lollipop

While I was cutting the envelope, my eyes caught the nearby juxtaposition of the front cover of Juliet's chap with the advertisement of the art exhibit featuring the brilliant Alberto Giacometti sculpture, Femme debout (Annette).  I thought that the shape of the skull and the shape of the sculpture were similar: 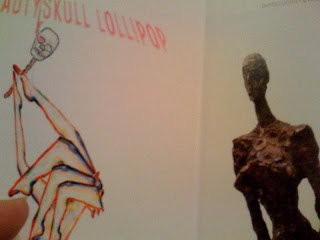 So I decided to cut up the image of Femme debout (Annette) and use it as interior illustrations for the mini-book: 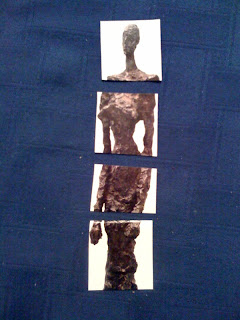 After organizing the interior, I wrote the title and author's name on the front cover for this result below. (Because a (postage) price is highlighted, a few days after finishing the book, I'd come to be reminded of certain book covers using barcodes: the front cover of Poemland by Chelsey Minnis and the back cover of NEST by Mei-mei Berssenbrugge which is almost covered by an enlarged barcode--design decisions that I've admired and deserved by the books for the wonderful poetry they contain): 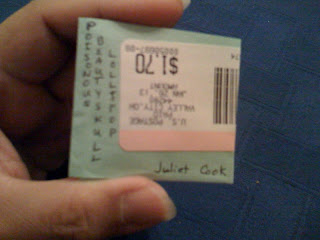 When you open the book, you first see this with the Arrow Tab encouraging the reader to pull out the accordion page: 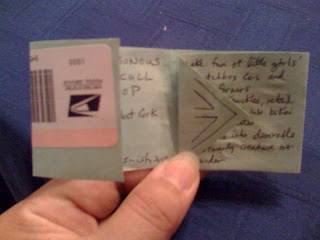 When the reader pulls out the page, this is what they see: 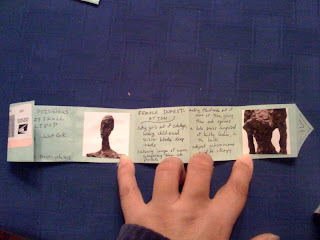 They would turn over the page to see the rest of the poem and illustrations: 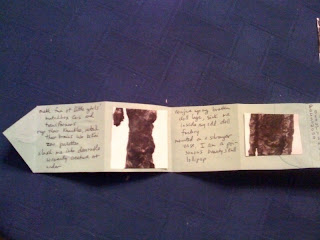 But the design was not yet finished!  Juliet Cook has released several chaps (by herself and other poets) over the years, and one of their common features is the use of an attractive ribbon as either stitch-binding or just tied around the seam of the chap.  I speculate that the only reason POISONOUS BEAUTYSKULL LOLLIPOP does not contain this feature is that it was published by another press.  Cook's Blood Pudding Press is the publisher of the chap that accompanied hers in the mail, Renegade // Heart, and so I'll show it here to give a example of the ribbon binding: 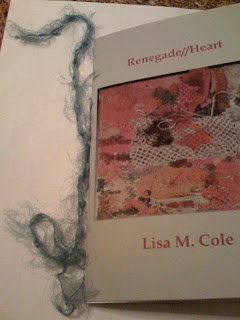 You can also go to Blood Pudding's Etsy shop to see images of how she uses ribbon bindings.  Consequently, I decided that Juliet's mini-book also should have a similar binding.  Using the white fuzzy ribbon that came wrapped around the two chaps, I thus created the final front cover: 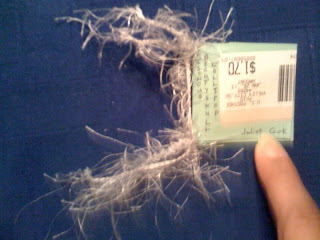 How neat to compare the real-size publication with its SitWithMoi mini-book version and see non-replication and yet authenticity. That is, when I look for images of miniature books, said books are often tiny copies of the real-life books.  Here, the cover of the mini book looks nothing like the real chap, and yet bears its own conceptual rationale for its design (of course, I'm not a biased critic here): 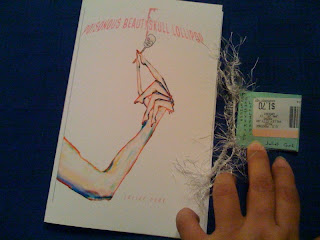 Ah, and now where shall we "shelve" Juliet's mini-book?  Well, why not on one of the lovely wicker chairs! 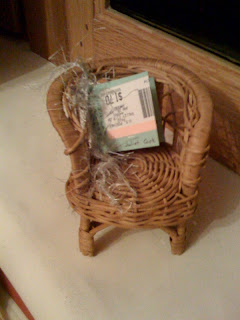